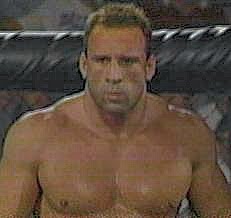 Former Olympian Mark Coleman was working as a personal trainer at
the Columbus Sports Connection when he got a call from Richard
Hamilton, former trainer for Dan Severn and Don Frye, offering to
train him for the UFC. One month before the event, Coleman went to
Arizona to train full time with Hamilton at Grand Canyon
University. Coleman is single, with no children.

What got you into wrestling in the first place?:

“My dad was a wrestler, and I just liked the one-on-one
competition. I started when I was in the sixth grade.”

And now why the UFC?:

“I’ve been watching it since it started, and was hoping for a way
to get into it. Then I got the call from Richard. It’s something I
think I can do, and adapt to. I want to be a champion and make some
money. Then all this training I’ve done will finally pay off.”

How would you describe your fighting style?

“Sort of a shootfighter. I hope to get the guy on the ground, then
hopefully strike on the ground — though if I have to fight on my
feet, I think I can throw a pretty good right hand. I just started
this kind of freestyle fighting with Richard, but I’m feeling
comfortable with it.”