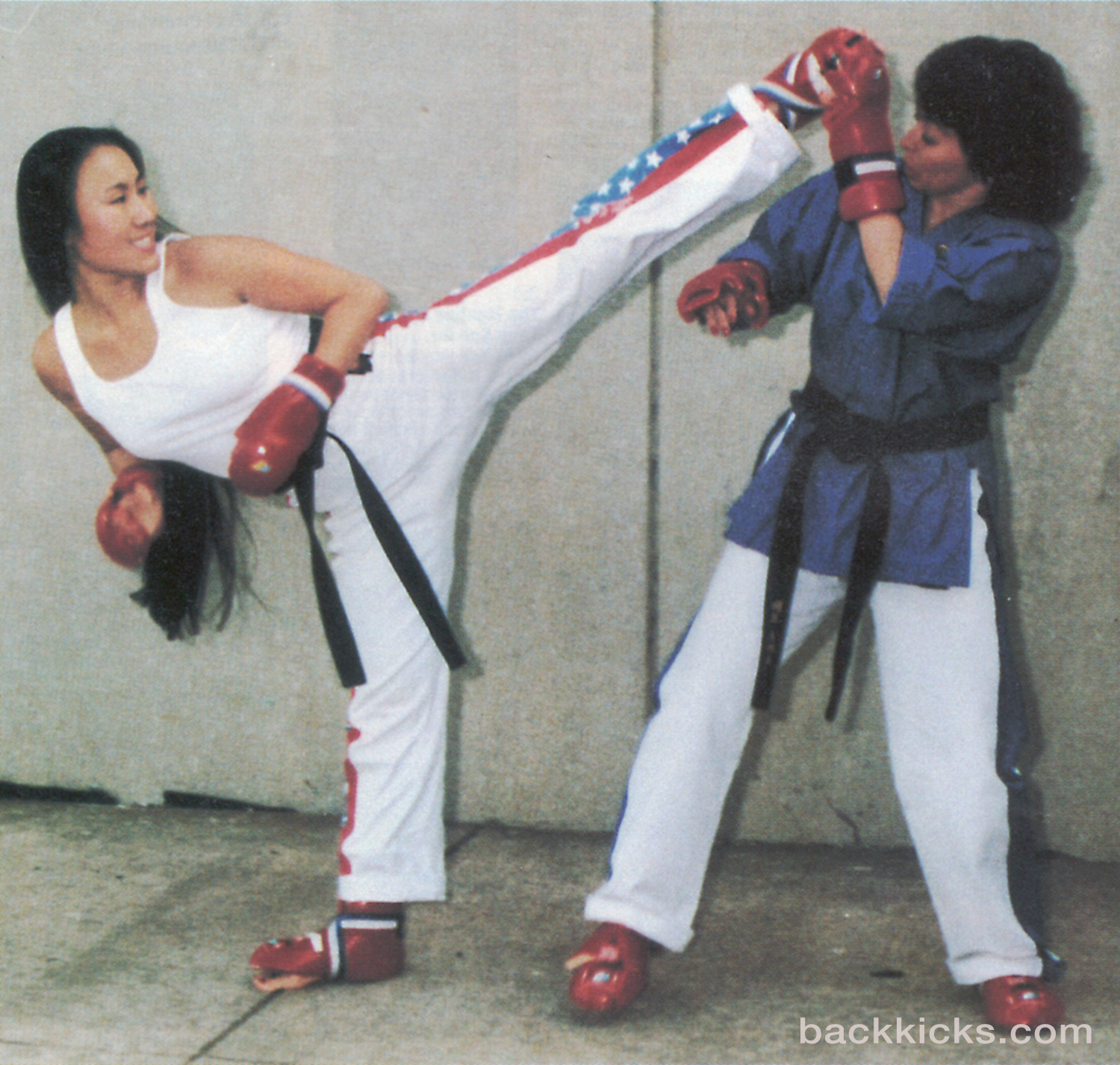 At age 10, Helen Chung Vasiliadis chose to make karate a part of her life; today, at 26, karate is her life. It’s led this young world champion to business, competitive,and educational opportunities and shaped her into what she is today – both personally and professionally. In her 16 years of practice, Helen Chung Vasiliadis has won countless titles in national and, more recently, international tournaments. She’s earned a physical education degree with a specialization in exercise physiology, which has enabled her to open a business in the steadily growing health and fitness field. And she’s balanced her career goals with her personal life, having married in February 1987. Indeed, Vasiliadis is the picture of success as portrayed in the minds of many of today’s ambitious young women. Perhaps one contributing factor is that her two older brothers, John and Howard Chung, also have been actively involved in martial arts and have provided a motivating force for her. John Chung was the number-one-ranked American form champion for several years. Vasiliadis says this forced her to be more competitive. “For so long, I lived in John Chung’s shadow,” she says. “People knew me as his sister. So I had to build my own name.” She’s done just that.

In October 1987, she won a gold medal at the World Association of Kickboxing Organizations (WAKO) World Championships held in Munich, West Germany. Vasiliadis represented the U.S. in the semicontact middleweight division (60 kilos and under, or 121-32 pounds). She showed her clear dominance of the division by defeating her three opponents with scores of 8-3, 9-6, and 13-3. Sixteen women competed in this division, fighting two rounds, two minutes each.

Unfortunately for Vasiliadis, her left knee gave out early in the competition and she couldn’t kick as well as she normally does. “I was in a lot of pain. I couldn’t kick – and I’m known for my kicking. I don’t punch usually, but I became a puncher then,” she recalls. “I also learned how to fake really good.” Of the ten overall gold medals won by the U.S. Team, three were in women’s competition; Lori Lantrip and Linda Denley brought back the other two. Since Vasiliadis knew a month-and-a-half in advance that she’d be competing, she spent these few weeks in heavy training to prepare herself. With her training partner, Elsa Cordero, she ran five times a week, lifted weights three times a week, trained for endurance for an hour each day, and practiced karate at least once each day. She had to lose ten pounds to compete as a middleweight and she had to work on her hand techniques since this was her weak area. “I’d say 80 percent of my karate training focused on the hands,” she says. “I knew I had to do my best because people who’d never seen me were going to see me – and they don’t forget you when you compete for the World Championship. I was representing the U.S. and I wanted to give it my all.” Vasiliadis began competing in the national circuit in 1979 and has been rated in the national Top 10 in both forms and fighting. She says that, until this year, she performed better in forms than as a fighter. “I did well in fighting, but when you fight, you’re not working on perfection. You’re looking for the fastest and easiest ways defend and attack. With the forms, you work on each technique individually to perfect it.”

Vasiliadis began her karate training at the Jhoon Rhee Institute, Washington, D.C., in 1972 and over the years has studied under such notable instructors as Jimmy Rhee, Kwan Ro, Otis Hooper, Floyd Jackson, Jeff Smith and her own brothers. After receiving her degree from George Mason University, Fairfax, VA., in 1984, she moved to New York where she taught part-time at the John Chung Tae Kwon Do Institute, which her brothers operate in Mineola. She had taken a full-time job at The Sports Training Institute in Manhattan as an exercise specialist where she worked with celebrities including Kathleen Turner, Ed Bradley, Mark Breland, and Burt Young. “They come across as ordinary people – just like anyone else,” says Vasiliadis. “But I was nervous.I felt honored to work with them and I pressured myself to do a good job.” Almost two years later, she returned to the D.C. area where she took a job as fitness director for the U.S.D.A., counseling employees. It was a year later when she and her husband opened One-to-One Fitness. He, too, earned a physical education degree from George Mason (that’s how they met) with a specialty in business. The husband and wife team now have close to 100 clients and have moved into a 2500-square-foot facility in the heart of Tyson’s Corner, one of D.C.’s corporate hubs. “We have personal training sessions for clients and work with each of them on an individual basis, Vasiliadis says. Each client must complete a questionnaire to determine their goals and to list all health and medical history. Then, she says, they’re given a fitness assessment. “We try to educate them about their own bodies and help them to understand what it is they need to work on,” she explains. Only after these initial steps do they begin training sessions at least three times a week, 45 minutes each session. While Vasiliadis no longer teaches karate classes, she continues to train three hours each week, sometimes working with Linda Denley, who travels from Houston, Texas to visit. She also works with forms champ Charlie Lee, also a student of the Jhoon Rhee Institute, who lives only a few miles away. Kicking and hand drills, sparring, and forms are all part of Vasiliadis’ karate workouts. She also lifts weights three times a week, working both the upper and lower body areas, and stretches for flexibility. Her diet consists of high-complex carbohydrates, minimum fat, 10-15 percent protein, and sufficient fluids. These habits are reflected in the Seoul, Korea native’s physique. At 5’5″, the 135-pound athlete has board shoulders, narrow hips, and muscular legs. “I think women are more athletic look-ing than ever before,” Vasiliadis states. “I think it has to do with the fact that they’re less intimidated about working out and competing. They have seen the opportunity and have come out. Overall, women are becoming healthier, too.” While these feminist views are freely given, Vasiliadis maintains that she’s more of a traditional, conservative woman. “I’m very family-oriented. I like to cook and do my husband’s laundry for him. I use his last name,” she notes. “And he’s very supportive. He runs the business while I’m away. He encourages me to compete. I’d like to continue competing in the World Championships every other year and have children in between.” She laughs, but her tone suggests this is no joke. If today’s women can have it all. Vasiliadis is one who’s going for it. And such achievement at this young age is evidence that she’s well on her way.