Hayashi is a brand of martial arts gear that emerged in Great Britain around 1990, then expanded to Germany and quickly into Eastern Europe where it created a strong foothold in the Czech Republic under Miroslav Sobotka. It was first developed to be a mail-order retail and wholesale store. Its glossy adverts and catalogs caught everybody’s eyes. It covered all styles of martial arts from kamas to boxing gloves and from Chinese satin kung fu robes to headguards. Some products became iconic like the face-shield headguard and the jackets with its large logo.

A legacy product from the 1990ies: The Hayashi headguard was popular with self-defense instructors and Filipino martial arts practitioners.

Over the years ownership has changed to Peter Kruckenhauser and the name has developed into a gear brand for traditional karate. Hayashi Gis and protective hand and foot pads are officially approved by the WKF – World Karate Federation, the association that represents the Japanese martial arts at the Olympic Games. 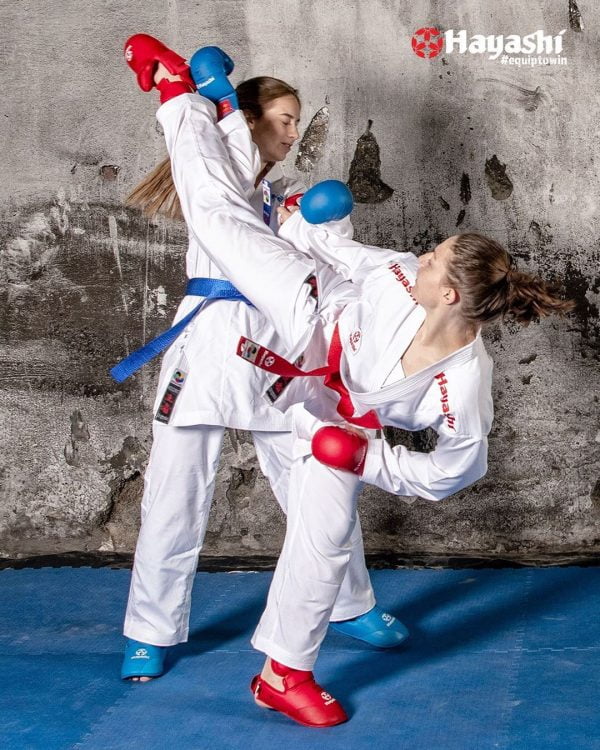 In the USA, Hayashi karate gear is distributed by Fighters Incorporated from Ormond Beach in Florida.
https://www.backkicks.com/fighters-inc

An Austrian kata competitor during a WFK tournament wearing a Hayashi gi.