Shortly before he died in July 1989, the legendary Gogen “The Cat” Yamaguchi, founder and world leader of goju-ryu karate-do, granted what became his final interview. It was conducted through an interpreter at his world goju-ryu headquarters in Tokyo by John Will, editor of Blitz, one of Australia’s foremost martial arts magazines. Blitz graciously permitted Fighter International to reprint select excerpts of that interview so as to share with the rest of the world the wisdom of this late, great master who spent 60 years in the pursuit of karate-do perfection. Born in 1909, Yamaguchi began his study of karate in 1929 under renowned Okinawan karate master Chojun Miyagi. Later Yamaguchi blended Miyagi’ s Okinawan goju-ryu with elements of soft Chinese techniques, yoga, and the Shinto religion to create a new form of goju-ryu. His innovations created a typically Japanese
style. In 1934, he organized the All-Japan Goju-Kai Karate-do Association and over the years built a strong, worldwide organization. There are conflicting opinions, but some historians maintain that as early as 1935 or ’36 Yamaguchi devised the form of freestyle karate fighting called jiyu-kumite (free-sparring). This method formed the basis for competition fighting in what we know today as sport karate. But World War II interrupted his progress. In 1939, Yamaguchi was sent to Manchuria as an intelligence officer and was captured by the Russians and held prisoner until 1947. It was during his imprisonment that tales of his astonishing skill emerged. As one story has it, in an escape attempt he demolished a concrete block within a sheer wall with one blow of his elbow. Yamaguchi was later nicknamed “The Cat” for his catlike movements. He gained his almost mythical status by performing such feats as meditating under icy waterfalls in the height of winter. Today Goju-ryu, Shotokan, Shito-ryu and Wado-ryu are the four most popular styles of Japanese karate in the world. New York’s Peter Urban, a Yamaguchi student, introduced goju-ryu to the U.S. in 1959. For his contributions to the martial arts, before his death Master Yamaguchi was decorated by the emperor with the Ranju-hosho, or Blue Ribbon Medal, and the Fifth Order of Merit. Because of his physical exploits, he, like Japan’s Mas Oyama, became one of karate’s living legends during his lifetime. His name stands as one of the greatest 20th-century karate masters. 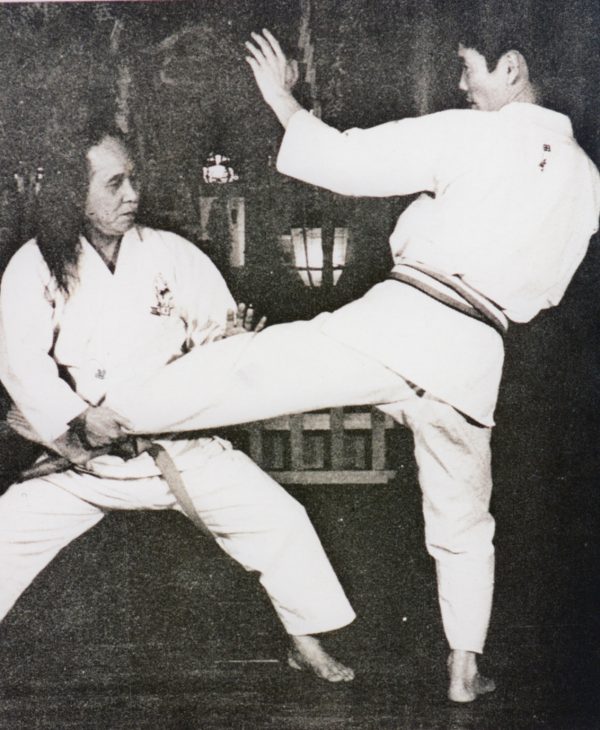 John Will: How did you come to develop the concept of free-sparring?

Yamaguchi: After the war [World War II], a part of my task was to reintroduce the art of karate to the public so that some of the skills could be better understood. I developed this type of free-sparring. But this now has developed into a competitive practice and is not the real meaning of budo [spiritually-related martial arts systems]. Kumite [“free-sparring”] for the real budoka is different. I propose that there should be a complete distinction made between what sport karate is and what budo is. Even earlier on, sparring was not [practiced] for gaining points, it was for the development of the art. With sport competition it is possible each time to say who wins and who loses, but in a real fight, until someone dies it is very hard to say who wins! The serious budoka [“practitioner of budo”] must completely separate sport from karate. First, we must apply ourselves to the study of kata and bunkai [the application of the kata movements], and thereby gain a good understanding and foundation of the principles of attack and defense. And then, after a fair amount of study, one :an kick can begin the practice of kumite. If one starts kumite blit practice without a proper understanding of basic skills, then this can be detrimental to me can his development. To be an expert at only one thing — like kumite — has no meaning. It is necessary to learn and understand all things. Fighting and getting a point has nothing to do with life; it is life and budo that I am concerned with. The way of budo is not to be concerned with winning. It is rare to come across a real artist who practices budo. I doubt if many really exist.

Will: Through the practice of a budo, does one learn to understand the difference between the mind, the body and the spirit?

Yamaguchi: Yes. These are three different things, but our goal is to unify them all through training. Through gyo [“training”] we can eventually do this. As we become older and experience more training, our understanding of the differences between the mind, the body and the spirit deepens, but at the same time we strive to unify all three. And, of course, there is no limit to this development. Through the practice of yoga [an Eastern practice involving prescribed postures and breath control], it also becomes clearer as to what the real meaning of the word budo is. Budo is concerned with an individual’s search for something.

Will: For many decades you have devoted yourself to the study and practice of yoga as well as karate. Does yoga offer another spiritual path for the martial artist to explore?

Yamaguchi: The fundamentals of yoga and budo are the same, especially so in the beginning and final stages. If one practices yoga steadfastly, or practices budo steadfastly, the destination reached will be the same. In yoga one learns to move and act in a natural way with no thought or concern. Rather than thinking about the action, or thinking about the goal, we must learn to achieve the state of muga or “no thought.” This is one of the roles of yoga … to achieve that spontaneity, that effortlessness in action. With no involvement of our conscious mind, we are freed to act without interruption and thought. So, ultimately, there is no thought in the process. And it is the same for the man of budo. One must achieve this state where there is no involvement of the conscious thought process. Just spontaneous action. In the early stages — just as it is with Zen meditation — one sits down and after some time begins to feel pain in the legs, etcetera, and finds it very hard to do. But after much practice all this is no longer a consideration; one feels and experiences that “nothingness.” This is the state of muga. It is most common for people to live and act in a state of zatunen…this is a condition where they have no concentration, no focus, a condition of conflict. It is this we must overcome through the practice of yoga and budo.

Will: Is yoga similar in any way to the practice of karate kata?

Yamaguchi: Yes, there are similarities between the two. If you attain a condition of muga, the state of “nothingness,” then the body will be freed. This is also how it is with the practice of kata. We try to achieve that state.

Will: What is the meaning and purpose of kata, in your opinion?

Yamaguchi: Anyone can kick and punch, but not everyone can do kata. It is one of the things that separates the artist from the fighter. The kata gives one a foundation in the principles of attack and defense. It should never be performed as just movement. It must be done with purpose, with a realization and understanding of the meaning of each move. It is a valuable training method and fundamental to the understanding of the art.
When one is learning the kata, he must use the imagination; he must see the punch or the kick coming! After training in this way for some time, we must then start to change our approach; that is, not thinking consciously about the movements. When we study the kata in the early stages it is important to understand fully what we are doing as we do it. But as we advance, the movement must be natural and spontaneous. Although the kata seems to be performed the same way time after time, as we progress our idea about the kata begins to change. We in goju-ryu have a particular type of training where we perform the kata solely within our mind, using only the imagination. This is done two ways: first, by imagining that we ourselves are performing the kata in a subjective sense. For example, we imagine we see and feel what we would normally see and feel if we did the kata. Second, we can also imagine that we are looking down upon ourselves doing the kata, from an objective viewpoint.

Will: What is the meaning and purpose of bunkai ?

Yamaguchi: The bunkai is the basis of all kata. It is created first, and then a series of them are joined together to become the kata. Basically, the purpose of the bunkai is to explain the meaning of the movements within the kata. [Thus] the kata and the bunkai are inseparable. It is useless to have one without the other and both are equally important.

Yamaguchi: [Physically,] as we get older the emphasis changes from power to technique. It is then that we may attain those intangible things which are of real importance. That’s why true karate is concerned with budo and not with sport or competition. Character development along with spiritual enrichment are a part of the budo path, as are mental and physical skills. Sport deals with rules, competitiveness and limitations; budo deals with none of these things. In budo there is no limitation to our development and understanding; in budo everything is possible! As a budoka, one can go deeper and deeper [into his art]; one must spend his whole life for the understanding of this.

Will: Is it your wish that the art of karate be preserved in the way you have developed it, or should it be further developed and refined?

Yamaguchi: It should be developed further, but the direction should not be compromised. If it remains as real karate, then yes, I would like it to be further developed. There are, however, so few people that can understand the real meaning of the martial arts, it can be detrimental for just anyone to change it. 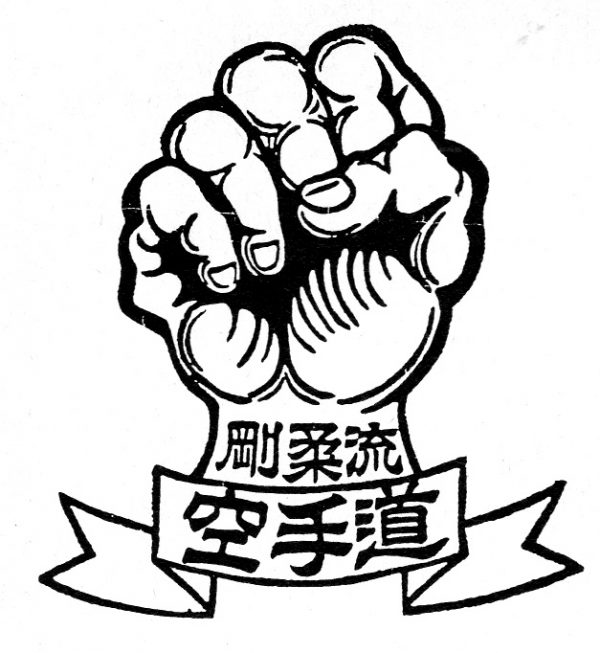 YAMAGUCHI, GOGEN (1909-89) Japanese karate master and head of the Japanese goju-ryu system of karate; nicknamed “The Cat.” He began karate in 1929 under Okinwan karate master Chojun Miyagi. In 1935, he organized the All-Japan Goju-Kai Karate-Do Association and became its chief instructor. In 1939, he was sent to Manchuria as an intelligence officer and was captured by the Russians and held prisoner until 1947. Upon his return to Japan, he continued his organization, which is today among the largest in the world. In 1936, Yamaguchi devised a form of free style fighting that had not existed in the traditional Okinawan goju system. Today this form of free sparring (jiyu-kumite) forms the basis of sport karate.
Due principally to Yamaguchi’s efforts, the All Japan Karate-Do Federation was established in 1964, which has succeeded in unifying some of Japan’s karate schools. For his contribution to the martial arts he was decorated by the Emperor with the Ranju-hosho, or Blue Ribbon Medal, and the fifth order of merit. In 1966 he wrote and published Karate Goju-ryu by the Cat. See also Japan, history of karate in.