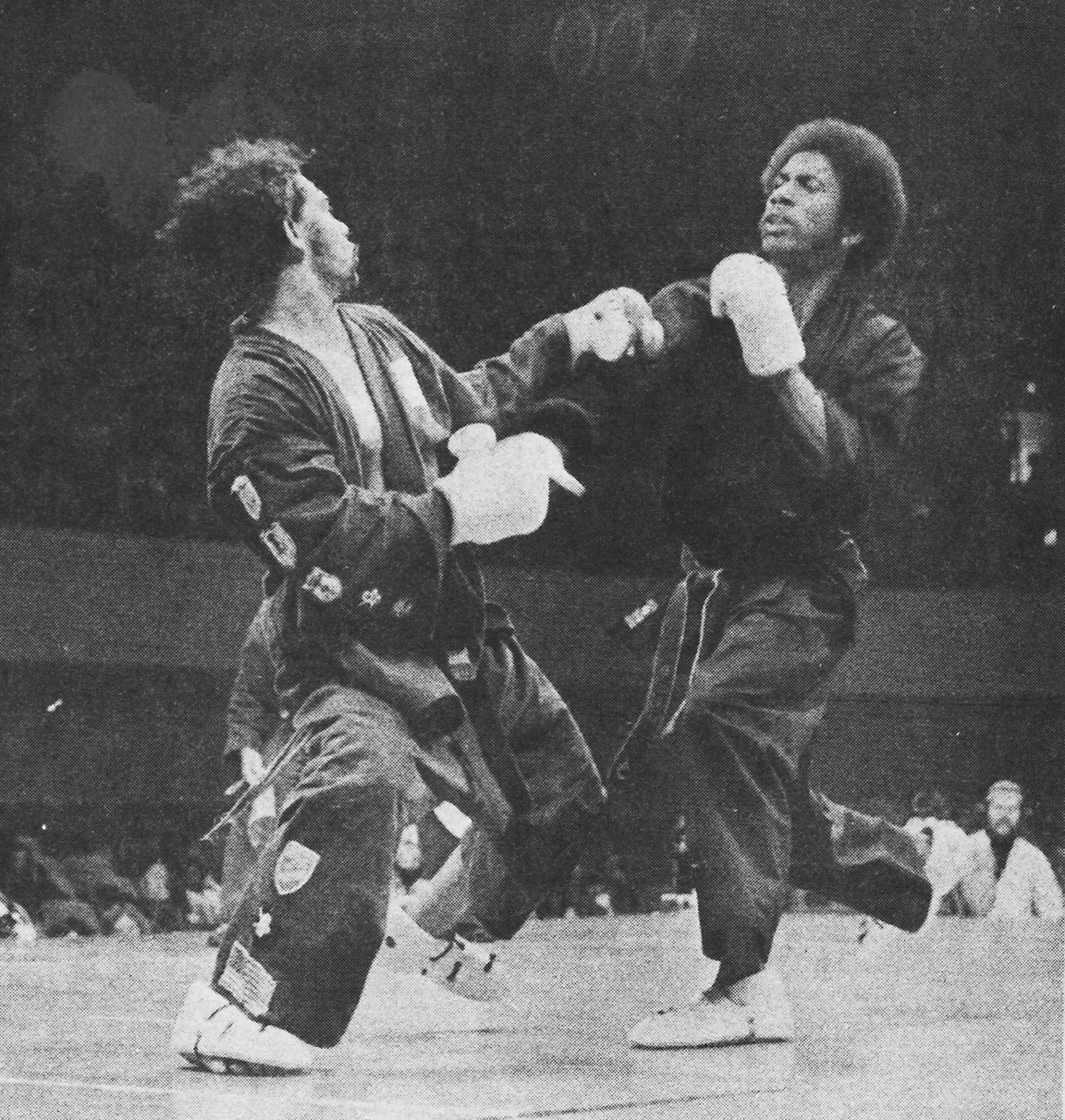 ROCKIN’ ROY KURBAN of Arlington, Texas snatched his most impressive victory to date by besting a field of seven world-rated pros and eight amateur finalists at the first Western Pro/Am Karate Championships at the Oakland Auditorium in Oakland, California. The world’s 10th-rated lightheavyweight downed 4th-ranked middleweight Ernest Russell and 3rd-ranked superlightweight Benny “Spitfire” Urquidez, both of Los Angeles, in the semifinals. Then the unintimidated veteran, returning to regular competition following a political battle with Texas karate leaders, went on to sweep the title and $500 in a nip-and-tuck match with 3rd-rated lightheavyweight Darnell Garcia of Los Angeles.

The tournament, which was considered the most prestigious karate event in Northern California history, seated eight world-rated fighters from various states in North America. Included in the formidable line-up were Midwest kingpins Flem Evans and Steve Kijewski, both of Chicago, Portland’s ninth-ranked lightweight Dan Anderson, third-ranked lightweight Cecil Peoples of Los Angeles, as well as Kurban, Garcia, Urquidez and Russell. The only upset over the predicted favorites occurred when rugged Phil Cornin, veteran of many past marathon encounters, shed retirement plans and defeated Cecil Peoples in the quarterfinals. The tournament featured several innovations. Firstly, eight Northern California promoters joined forces to produce the most significant event ever staged in the region. The cooperative venture was financed by Sid Campbell, Steve LaBounty, Tom Schlesinger, Ron Marchini, Carlos Navarro, Jerry Reitenbach, Al Reyes and Gabe Vargas. The approach apparently worked well for the co-op group. Nearly 600 competitors turned out for the amateur contests, according to a spokesman, and 80 black belts from seven western states and Canada competed under professional rules in four weight divisions. The amateur competition, which was sanctioned by the Northern California Karate Referees Association, reportedly ran like clockwork. Tom Schlesinger, the association’s president, claimed after the competition that the association has been the single factor in upgrading the quality of tournaments in Northern California through the standardization of rules and training of officials over the past one-and-one-half years. The event also marked the first time that a tournament in the region drew world-ranked fighters. Another first was the mandatory use of Jhoon Rhee’s Safe-T equipment in the black belt divisions in conjunction with the professional semi-contact rules. Several amateurs decided to drop out of the stiff competition, however, because of the contact required under these professional guidelines. Many of the region’s ex-fighters were in attendance to assist with the officiating duties. Byong Yu, Jim Grady, Ralph Castellanos and Bob Halliburton lent their assistance to maintain smooth judging. Also on hand was a Hollywood film production company led by George Waite, a black belt student of Ed Parker and public relations ace of the annual Internationals in Long Beach, California. The crew filmed 21,000 feet of action during the evening contests. This particular segment was part of an upcoming karate documentary entitled The New Gladiators.

When the preliminaries ended, eight regional players had earned an opportunity to compete in the finals with the eight world-ranked fighters. The finalists of the amateur competition were: Oakland’s Bill Owens, then ranked as the number-one fighter in his region Canada’s Bob Smith, seasoned veteran Phil Cornin, Marvin Langford, a student of Ron Marchini, Byong Yu protege Donald Yee, Clint Mosley, Bob Tillman and Howard Hayden of Atlanta, Georgia. The finals reportedly attracted more than 2500 enthusiastic spectators, and began with a point demonstration by dynamic superstar Fumio Demura of Santa Ana, California. The first round of eliminations quickly established the reason why the seated professionals had gained national reputations. In all but one exception, the world-rated pros dazzled their lesser experienced opponents with domineering ring prowess. And in several cases, the eager amateurs were knocked on the seat of their pants. But it was in the first round that Cornin scored his brilliant upset over Peoples. Yee was defeated by Dan Anderson in overtime, Steve Kijewski bested Tillman, Langford lost to Kurban, Ernest Russell defeated Bob Smith, Bill Owens (now ranked 5th in the world lightweight ratings) lost to Flem Evans, and Garcia beat Hayden. Clint Mosley, who was injured in the preliminaries, was unable to continue. Thus, Benny Urquidez received a bye. The second round was launched by a multi-man attack exhibition by Fumio Demura. When the showstopper left the stage, the crowd cheered and applauded so wildly that he was forced to return to perform a kata in order to appease the appreciate audience. It took several minutes before order could be restored after Demura finally exited. Urquidez then faced Cornin. At the end of regulation time, the pair was tied and overtime was necessary. Urquidez became the aggressor and quickly scored with a wheel kick to Cornin’s ribs, thus eliminating the last non-seated contestant from the finals. In the other second-round bouts, Evans defeated Anderson, Garcia outpointed Kijewski and Kurban beat Russell.

The semifinals found Kurban facing Urquidez and Garcia pitted against Evans. The Kurban/Urquidez encounter was trademarked by explosive exchanges. At one point, the Spitfire brought the crowd to its collective feet when he narrowly missed Kurban’s head with a jumping, spinning back kick. When time expired, however, Kurban had outscored his aggressive opponent and moved into the finals. Darnell Garcia, perhaps the slyest fighter on the pro circuit, planned a different game in his match with hard-hitting Flem Evans. Using the rules established at last year’s Top 10 Nationals in St. Louis to his advantage, Garcia executed a perfect sweep-punch combination to garner three points and an early lead. His lead soon proved insurmountable, and Garcia beat Evans to move into the final bout against Kurban. The finals consisted to two three-minute rounds. The winner was to receive $500. The loser or runner-up would get $250. Evans and Urquidez each won $125. The first round was scoreless as Garcia and Kurban tested each other’s defenses. The second and final round saw a marked increase in activity. Kurban scored first with a ridge hand to the head. Garcia came right back with a ridge hand of his own to even it up at 1-1. Kurban then took a two-point lead with the same ridge hand techniques. Garcia attempted to press his wary opponent without success. In a race against the clock, Garcia grabbed another point. But time ran out on the former Internationals grand champion, and Rockin’ Roy won, 3-2. The victory was yet another important step in Kurban’s comeback since his competitive inactivity brought on by the controversial American Karate Black Belt Association ban in Texas. Even more importantly, it undisputedly established Kurban as one of the finest contemporary fighters to come from the Lone Star state.