Back 30 years ago boxing was considered a bloody sport, karate too dangerous and MMA wasn’t even around. In the 1980ies it was prudent to think the bloodily dangerous sports were doomed to become socially inacceptable. Politics and medical experts tried to outlaw them and the IOC wanted to ban amateur boxing from the Olympic Games. Now, fighting sports are as popular as never before. One of the main reasons for this is probabaly the new generation safety equipment that changed the reputation of the martial arts. 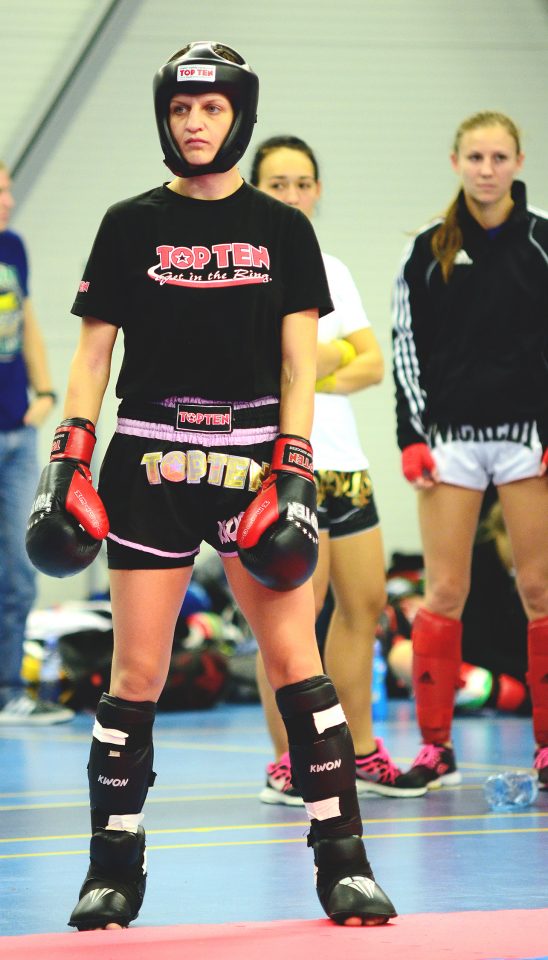 The competition headguard is very popular with female amateur boxers and kickboxing girls.

What happened in the 1980ies to change the safety standards was the work of a single person. German martial arts pioneer Georg F. Bruckner invented the Top Ten headguard. It was the first headguard able to protect the brain from trauma by absorbing the impact of hits by a factor of around 50% over its entire lifespan. The most innovating part of his new headgear was the use of a synthetic rubber with open bubbles and a sealed surface. Upon impact the air inside the bubbles would be pressed into nearby chambers thus soflty reducing the power of impact. Afterwards the air would flow back into the area making the headgear ready for the next hit. The material would be good to take another blow. Scientific tests demonstrated amazing effects with durability of over 100,000 hits without any wear to the structure of the Bayflex rubber. The material chosen for this has been used by German carmakers to fit dashboards, passenger seats and other safety relevant parts. It had been a breakthru for Bruckner and the headgear was patented in 1982 for the first time. For may years to follow the Top Ten headguard was the Official headguard at Olympic Games for amateur boxing, many World Chamionships in both, boxing and kickboxing.

Today, the Top Ten head guard is still very popular for kickboxing and boxing despite the fact that its patents have expired and it’s being cloned and copied by many other companies. The competitors however, do not copy all the details. The inventor Georg F. Bruckner put a lot of love into details that benefit the practitioner. He loved to serve good fighters and had many competitors, trainers and scientists contribute to the development of his equipment. Here are a couple of markers that make the Top Ten headguard so unique:

Inner structure: The inside of the helmet is structured with channels leading sweat away from the face. This concept will prevent sweat from flowing into the face and eyes when hit by punch on the forehead.

One Piece: The item is made up of one molded piece. It is easy to clean. Tear and wear is reduced to a minuímum.

Straps: Velcro straps on the back of the head and under the chin make it easy to adjust the size of the protector for individual fit. However, the user must follow the instructions how to install them in order to maximize tractive power on key portions of the guard. It is an easy process, essentially. A tight fit feels comfortable while preventing the piece to slip and slide.

Metrial: The Bayflex polyurethane material is absorbing shock at a high percentage. It lasts very long without wearing down. Reinforcements at crucially import areas like the openings for the velcro straps reduce tear and wear to increase longivity.

Today, there are many different colours and designs available. From classic red and white competition to neon-green advangart. The one that might suit training best would be the the facesaver head guard for full protection of cheekbones and chin. Try it out and see for yourself.