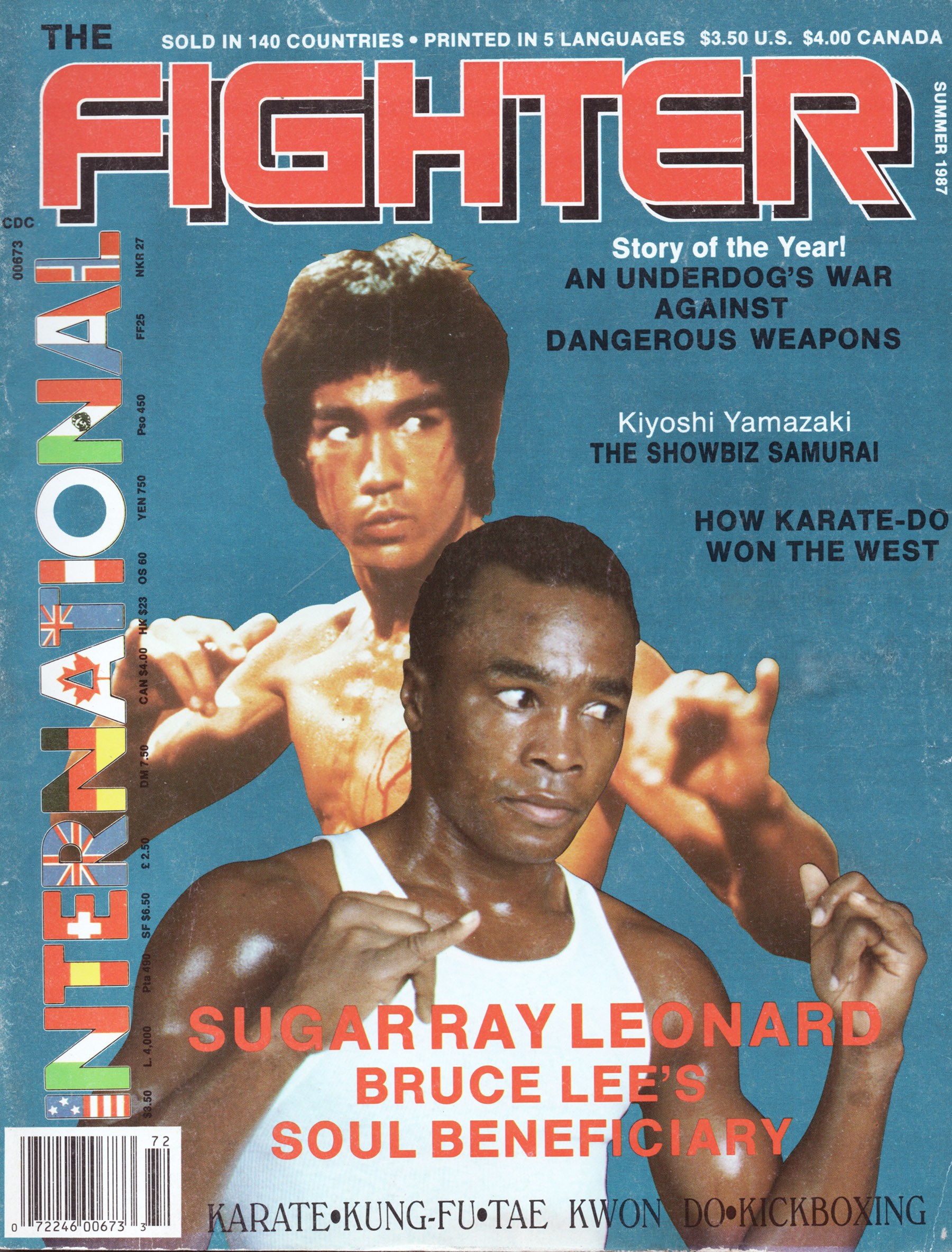 This article was published inside Fighter International issue summer 1987

“I wanted to do in boxing what Bruce Lee did in films,” says Sugar Ray Leonard, one of histor’s greatest boxers and box-office attractions. In this exclusive story, a king of the ring explains how the king kung-fu influenced his career a his artistic fighting style. Will it help him in his comeback bid against the formidable ” Marvelous” Marvin Hagler?
Interview by Rick Mandris – Story by John Corcoran

Before his retirement he was called the biggest gate attraction in boxing history. If earnings define success, his remarkable income of $37 million by 1982 had placed him in a class all by himself. He is the incomparable Sugar Ray Leonard, the welterweight who for the first time brought the big money into the lower weight divisions. Blessed with cat-like reflexes and lightning hands, 5-foot-ten, 147-pound former champion has also been called the most accomplished and graceful fighter in boxing. He epitomized that rare combination of being both flashy and effective. And, unknown to many martial artists, Leonard emulated the late Bruce Lee, who was one of his idols. “Lee was an artist,” Leonard said in a 1982 Playboy interview, “and, like him, I try to go beyond the fundamentals of my sport. I want my fights to be seen as plays that have a beginning, a middle and an end.” Leonard amassed an amateur record of 155-5 before entering the 1976 Olympics and winning the gold medal. He turned pro for eight years until his premature retirement due to a detached retina. He fought for the last time in Worcester, Massachusetts on May 11, 1984. He won, but was knocked down for the first time in his career and soon after announced his retirement again. On April 6, he’ll unretire again to face the biggest challenge of his career in “Marvelous” Marvin Hagler. Today, at 30, the ex-champion from Silver Springs, Maryland is a regular fixture on CBS and HBO as a ringside commentator.

Leonard’s pro record was 33-1 with 24 KOs, his only loss at the stone hands of Roberto Duran, a loss he avenged in the rematch. His pro career can be gauged in numbers — big numbers. Leonard earned $1 million for dethroning welterweight king Wilfredo Benitez; $2.5 million for KOing Ayub Kalule to win the junior middleweight crown; $17 million for his two fights with Duran; and $11+ million for the welterweight title unification bout in which he TKOed Thomas Hearns in the 14th round. More than 300-million TV viewers watched that last fight. Leonard will earn $11 million against Hagler’s $12 million for their April 6th bout in Las Vegas. It is the Bruce Lee connection that intrigued us. We assigned Rick Mandris, Angelo Dundee’s assistant trainer and The Fighter’s boxing editor, to do the interview. But Leonard proved as elusive outside as he had been inside the ring. Because of his jetset schedule it took Mandris some eight months to get the interview, even though he’s an acquaintance of Ray’s. We feel the uniqueness of the story was worth the effort. Leonard got his first look at Bruce Lee in 1974’s Return of the Dragon, in which Lee and Chuck Norris engage in a classic climactic fight scene filmed in the Roman Coliseum. “I’ll tell you,” says Leonard, “I was very excited by what I saw. I appreciated Bruce’s movements, his attitude, and the scientific techniques he displayed. I wanted to emulate him; I wanted to do in boxing what he did in in films.”
That’s just what Leonard did. He actualized in the boxing ring what Bruce Lee had put on film. The big difference of course, was that Lee’s fights were choreographed whereas Leonard’s weren’t. In emulating Lee’s artistry, he could very well have gotten his head torn off. But then, Leonard, like Bruce was a spectacular and gifted fighter. Otherwise, it would have been suicide to playact with an opponent like, say. Roberto Duran, who was at the time the closest thing to a legalized killer that society allows. Admittedly, Leonard did copy Lee’s style and grace, speed and technique. but he refined these traits to suit his own body style and natural gifts. “I liked the fact that Lee was always control and very confident,” Leonard told Playboy in 1982. “He’d lay back and be a gentleman, and he wasn’t really outspoken, but all along he knew, that whenever he wanted to he could kick any guy’s butt. He had lightning reflexes and he could move and think and just pick his opponent’s apart. In a sense, my left jab comes from him. After watching Lee, I became much more precise about landing my jabs or an opponent’s nose or between his eyes.”

Before his retirement, Sugar Ray Leonard was the biggest gate attraction in boxing history, having earned a remarkable $37 million by 1982. On April 6, he meets Marvelous Marvin Hagler.

“I also got some moves — both offensive and defensive — from him. For instance, he’d let a punch come within a fraction of an inch of his face and then he’d slip it and pop a guy. I tried to emulate that. So, Bruce Lee played a role in my professional career as a fighter.” In which fights does Leonard believe he most emulated Lee? “One fight in particular,” he explains, “was Marcus Geraldo and another was Roberto Duran II, because of the lateral movements. Mainly, it was a matter of the attitude. I felt there was a lot of compatibility between boxing and the martial arts and I was able to demonstrate that in the ring.” How true. His stylishness, and the ability to shift attitudes, was amply displayed in many of his big fights. In covering his 1981 fight with Hearns, Sports Illustrated wrote, “Hearns was totally baffled by Leonard’s quickness and agility; it was like trying to catch a puff of smoke, only this smoke was throwing thunderbolts.” And later, “He was confused by Leonard’s blinding speed, and dazed by his unexpected power. Don’t let Leonard’s baby face and angelic smile fool you; within, there is that same mean beast that inhabits all great fighters.” In that fight, Leonard had forced Hearns to back up for the first time in Hearns’ pro career. Another ploy Leonard often used became something of a trademark of his showmanship. He’d literally sprint from his corner at the bell and, before his intimidated opponent was barely out of his corner, Leonard would pummel him with a barrage of stinging, high-speed blows. That’s a principle of unpredictability that Bruce Lee often displayed in his films, and one he taught to his jeet kune do followers. Muses Leonard, “People are quite surprised when I say I picked up a few martial arts movements. They seem really surprised that boxing could come in contact with [the Eastern] martial arts, that they could blend so well. But according to Leonard’s former advisors, not everything blended so well. Why, for instance, if he was so taken with the martial arts, did he never study them? “I had wanted to take a few karate lessons while I was involved in my amateur career,” he says. “But it was mentioned to me that it wouldn’t be in my best interests because it has a tendency to make you stiff.” This problem is something we see all the time with American kickboxers. Only a handful truly know how to punch properly and have difficulty adapting to Western boxing (see article in this issue). Part of that problem is an upper-body stiffness resulting from the habitual reverse punches used in most martial arts, particularly the so-called “hard” styles. “Just recently,” says Leonard, “I started watching a lot of the kickboxing [on ESPN Cable-TV]. I think that that, too, is an art. They [the fighters] don’t utilize boxing too much; it’s more so the kicks. One thing you can appreciate about it is the conditioning.” What does Ray like about the sport? “That someone wins,” he retorts, laughing. “And the participants are becoming more vocal. They’re starting to become entertainers. Like the way [Muhammad] Ali and I were, and it helped [build interest in] our sport. People like to hear those types of dramatized press conferences, you see, so long as it doesn’t get out of hand.” Through published photographs over the years it became evident that Leonard preferred the karate headgear while training instead of the traditional leather boxing headgear. Wasn’t that unusual? “First of all,” he explains, “the karate headgear is light and it’s durable. Also, it could minimize the trauma of punches; I think it absorbs punches better. I also found that I could see better [than with the boxing headgear]. My vision wasn’t impaired by it. I wore it all the time [in practice].” Although Leonard never studied the martial arts, his son, Ray, Jr. — the one-time lovable star of those popular 7-Up commercials — did, under the tutelage of Washington, D.C.’s Jhoon Rhee. “My son really enjoyed the martial arts. It gave him self-confidence. He prematurely retired [sound familiar?], but in fact he wants to get back into it now.” Leonard recommends both boxing and martial arts training for kids today. “I think both exercise discipline — not smoking, not drinking, and so on. I think they’re both great sports to develop a kid’s pride and sense of good sportsmanship. I don’t lean towards either one. I think they’re both good.” And so closes a rather remarkable story: how one fighting star’s film career influenced that of another’s in the boxing ring. It’s just one more extraordinary chapter in the life of — and the legacy left by — the late, great Bruce Lee.

Sugar Ray Leonard’s strongest link to the martial arts community has been his relationship with Washington, D.C.’s Jhoon Rhee, the veteran tae kwon do pioneer. Leonard, who resides in nearby Silver Springs, Maryland, became acquainted with Rhee at the Touchdown Club, a Washington sports organization, during a banquet in Ray’s honor for having won the 1976 Olympics. “Around 1983,” Rhee recalls, “Ray Leonard, Jr. joined my classes. Sometimes, Juanita, Ray’s wife, took lessons, too. Occasionally, Sugar Ray came in to watch the training sessions.” At his gold belt test, after four months of training, Ray Jr. made a comment that belied his age. Rhee asked the class, “Who can tell me what is the purpose of human life?” Ray Jr. raised his hand then answered, “Hapiness.” For his intelligent reply, Ray Jr. received a big round of applause from everyone present. Rhee never forgot that mature comment. Mr. Rhee’s most amusing episode came when Sugar Ray was posing for The Fighter’s cover. Says Rhee, “I showed him a high side kick and stopped my foot within an inch of his nose. He was so surprised by the force of the kick that he jumped back and called to his brother, Did you feel the wind from that kick?’ His brother, laughing at Ray’s reaction, had felt the “wind” from Rhee’s kicks during a warm-up session. The sheer force of those kicks had brought about the same type of reaction from him.”