California’s Michelle “Mouse” Krasnoo was a famous American competitor on the open karate circuit in the 1990ies. She cought people’s attention by picking provocative and colorful uniforms and costumes for her performances. She was most known for her musical kata appearances with open hands and Japanese weapons such as kama. Michelle Krasnoo won several national tournaments as a black belt and participated at the Challenge of the Dragon, a talent serach organized by Don “The Dragon” Wilson in the late 90ies. She also played parts in a handful Hollywood movie productions. She still teaches martial arts in Los Angeles. 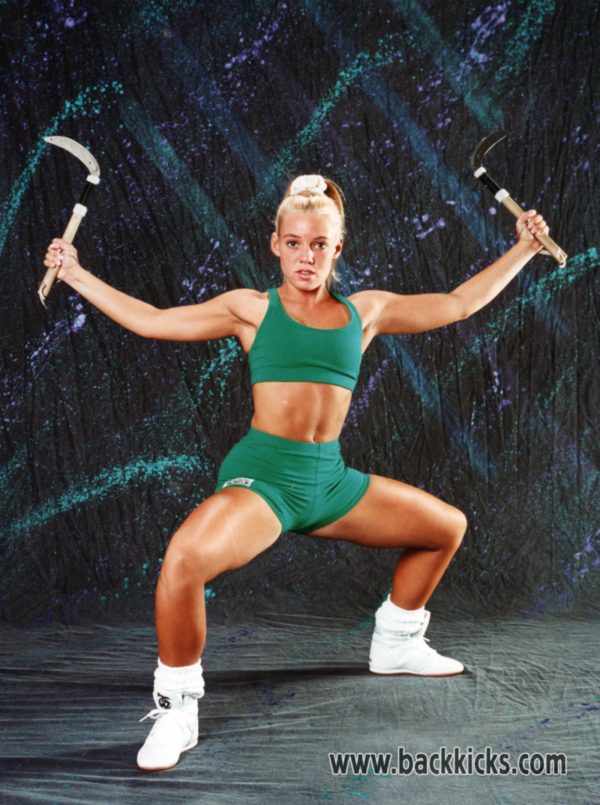 Here She Comes To Save the Day
Michele “Mouse” Krasnoo is on her way! She isn’t one of those dreamers who thinks that because she has a skill to offer, producers will come flocking to her dojo door.
BY JOHN STEVEN SOET

Aglint of sunlight shimmers off her blonde tresses. She relaxes, letting the tension drain from her taught, 100-pound frame. Suddenly, her explosive energy penetrates the arena. “My name is Michele Krasnoo,” she cries, “my style is tang soo do; I train at the Sherman Oaks Karate Studio.” As the music blares, she launches into a forms routine reminiscent of the days of Malia Bernal, Cynthia Rothrock and Karen Sheperd. Each move precise and crisp, each transition flawless, each kick powerful and controlled. Michele originally began training un-der her father, Bernie Krasnoo, proprietor of the Sherman Oaks Karate Studio in California, at the age of eight. Her tender, developing voice gave her a high, faint kiai, which earned her the nickname “Mouse.”
The Early Years “My dad ran a karate school,” begins Mouse, her green eyes sparkling, “but he never forced it on me. I’m very glad because, if he had, I’d probably have been rebellious. He waited until I showed interest, and then brought me into it slowly, and wanted me to ask if I could train. “I was very shy, and too intimidated to take lessons. Then, one day, after watching my older brother Jamie, I just showed up unexpectedly for class. The class was all boys. “I had to earn my ranks the same as everyone else. In some cases, since there was family pride involved, I had to train much harder. Because I was the instructor’s daughter, a lot of people were very com-petitive with me. I couldn’t afford to not be my best because everyone was watching me.” In Mouse’s case, the competitiveness was harder than most schools in that the Sherman Oaks Karate Studio, first started by Joe Lewis in the 1960s, has turned out six worldchampion kickboxers (her father was Cheryl Wheeler’s trainer) and numerous international tournament winners. “In reality, I had to be better than the others because, due to my size, I had to be stronger just to keep up with them and more flexible just to reach the guys.” Mouse laughs, displaying a picture of herself, all of five feet, kicking her six-foot, three-inch brother at face level. In the ten years that followed, Mouse lived and breathed tang soo do, constantly striving for the power to compensate for her diminutive frame. She practiced her martial arts for hours each day while carrying a full schedule in high school. She stretched until her negative splits surpassed Van Damme’s. She lifted weights ’til her Michele Krasnoo Today These days, the sha’pely 18-year-old, now an instructor, is living proof of the benefits of training. Quite often, her unique routines, risque costuming, and generous figure create trouble. “Michele has one routine where she performs wearing an aerobic-style top,” offers her proud father, Bernie “Pops” Krasnoo. “There’s nothing obscene about it. Girls wear much less to the beach. “She got up to start her form and took off her jacket, showing this top. One of the judge’s eyes nearly popped out of her head, and she started giving her this attitude look. Before Michele even announced herself or started her routine, I saw the sheets and this woman had given her a zero.” Michele’s eclectic routines have gained her international notoriety for their variety and zeal. In Las Vegas she became Elvis, escorted to the stage to the music of Strauss by a team of bodyguards. To a medley of the king’s greatest hits, she gyrated, swayed, kicked, leaped spun and punched. In another routine she becomes the Phantom of the Opera, donning a half-face mask and performing to the classic strains of the rock opera. In still another, she’s a female Rocky, strutting her stuff in patriotic stars and stripes. Currently, Mouse holds the National Black Belt League championship for musical kata and women’s hard style kata. She is also the TPA’s first-place winner for women’s showmanship and women’s hard kata, and was elected to its hall of fame. She’s also finished a (snap, crackle, pop) Rice Krispies commercial, appeared in Concorde’s Don Wilson film, Black Belt, and can be seen in Jerry Trimble’s Full Contact duking it out a la Lionheart with another woman. Mouse was able to choreograph her own fight scene, and it looks so realistic that people have been seen cringing when she lands a haymaker on her nemesis.

Becoming Mighty Mouse Like any other young lady with looks, talent and marketable skill, Mouse has her heart set on a film career. Aside from the fact that her attributes lift her above the “wannabes” and place her at the top of the “oughtabes,” she is also astute enough to have learned from her colleagues. “I admire just about any woman who came before me,” she confesses. “But every new generation has certain advantages. Most of the female martial artists who went into film became well-known as martial artists first, and then were approached by producers well into their careers. They thought, ‘Why not?’ and did a few films. But, unfortunately, a lot of them started too late in life. In Hollywood, a beginner is considered over the hill if she’s 25. “I started before 18, but I couldn’t make much progress because of the age thing. If you’re under 18, you can only film half a day, and you need an on-the-set tutor. Why should anybody hire you when they can getan 18-year-old who looks 15 or 16? Now that I’ve finally hit legal age, I’m ready to go for it.” Michele is not one of those dreamers who thinks that because she has a skill to offer, producers will come flocking to her dojo door. “So many martial artists have appeared on camera before they were ready that martial arts have come to mean ‘bad acting’ in a lot of people’s minds.” Aware of this problem, Michele has trained extensively in acting and cold reading workshops. Additionally, she is determined not to repeat the mistakes of many of her peers. “There are so many who are so eager to work they’ll take anything that comes along, even if it’s not made by professionals. What happens is they get popular for a while, which proves the strength of martial arts on the screen, and make a few films. If they keep working with amateurs, pretty soon they work themselves into a position where they’re overexposed and no studio will touch them. You can’t be too picky and hold out for Scarlett in Gone with the Wind II, but you have to be selective of the com-pany you keep.” What does she think of today’s current crop of male martial arts stars? “Well,” she laughs, “I have to be diplomatic. I’m not going to mention any names, but there are a few of them I’d feel real sorry for if they were ever involved in a real fight.” But they’re veeeery good looking,” she quickly adds.

TOO ATTRACTIVE FOR HER OWN GOOD?
AS ANYONE WHO CAN LOOK AT PICTURES WILL AGREE, Michele “Mouse” Krasnoo has one of the most attractive bodies in the sport of karate. Considering her blessings 50% genetic, 50% hard work, she has no problems with displaying her form at tournaments. “A person’s physique is a byproduct of training,” according to Michele. “Part of the allure of martial arts training is that it gets you into better shape than just about anything, with the added benefit of self-defense. I worked very hard to get my body to look like this, and I chose costumes that would let the judges know that my dedication paid off on the outside as well as the inside.” Unfortunately, Michele’s spectacular figure and revealing attire have caused quite a flap on the tournament scene. Michele’s father and trainer, Bernie “Pops” Krasnoo of the Sherman Oaks Karate Studio in Sherman Oaks, Calif., reports an enormous amount of complaints regarding his daughter’s now-notorious costuming. “A lot of what she has came from mother nature,” says Bernie. “Should she be penalized for that? But the rest of it came from training, so she wears a bare midriff to show off her abdominals, gi pants cut to display the leg muscles, and bare arms. Traditional gis were simply the clothing of the day when martial arts were founded. If most arts had been founded in California, maybe the women would be training in G-strings and the men all wearing Speedos. “I was at one tournament where Michele was wearing a bare midriff top. The minute she took off her gi jacket, a female judge gave her a zero—before she even started to compete! Most recently, at an open competition, a number of well-known female competitors refused to compete if Michele were allowed to wear her outfit. They claimed it was too risque and not appropriate attire. Clearly a case of the have-nots versus the haves.” Triple threat WAKO world champion Christine Bannon-Rodrigues feels differently. “The outfit she was wearing was very inappropriate,” according to Christine. “We don’t exactly wear traditional gis ourselves, but it’s disrespectful to show that much skin.” Christine’s husband, Don Rodrigues, echoes her sentiments. “Mouse is a nice girl and a very talented competitor,” he states. “She has it within her to be number one if she continues to improve at her current rate. But a lot of people feel she’s being judged for her body, not her skill, and she wouldn’t have placed as high if she wouldn’t have been dressed the way she was.”

Double Standard? Michele, who recently won the starring role in Kickboxer feels she has been the victim of a double standard. “At the tournament where I was told to cover up,” she relates, “the two top male competitors both took their shirts off before their performances. It’s very common to see men take off their shirts and oil themselves up before they compete. “I guess what I’m saying is you can’t have it both ways. You can’t show beefcake and outlaw cheesecake. If I have to cover up, I want Richie Brandon to keep his shirt on.” Karen Sheperd, one of the most attractive competitors in the history of forms competition, has yet a different point of view. “I make a living playing Red Sonja at the Universal Studios tour,” says Karen. “I parade around in a metal bikini all day long, so I can hardly be considered a have-not or a prude. But I consider risque attire inappropriate for martial arts competition. I also don’t feel the men should be allowed to take their shirts off. But I do agree that if Michele has to wear more conservative outfits and the men are allowed to compete shirtless, that is a double standard and very, very wrong.”