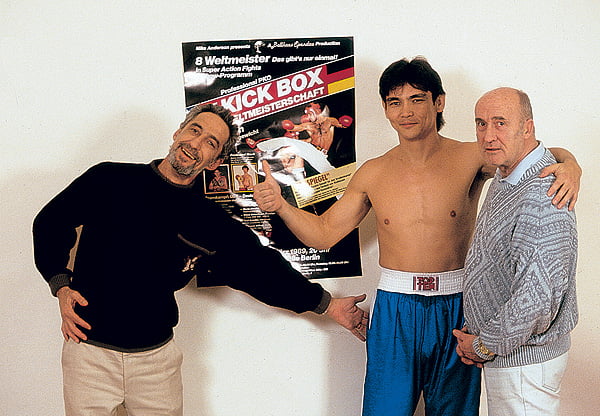 In 1992 our global martial arts community lost one of it’s most memorable and controversial personalities: Georg F. Brueckner of Berlin, Germany. George died of cancer on December 30th 1992 in a Berlin hospital after battling for his life for many years.

Anderson and Brueckner were responsible for modernizing the sport to more competition and away from traditional kata. Back then tournaments were kata, only, with kumite deemed too dangerous to practice.

Friendship with Mike Anderson
As one of the first German martial artists to practice Karate kumite and Taekwondo, George opened one of the first commercial martial arts schools in Europe. Besides, he played parts in various movie productions as an actor and stuntman including the epic Film series Jerry Cotten. Frequent trips to USA during mid to late 1960ies brought George into contact with the greats of American Karate including Bill Wallace, Chuck Norris, Bruce Lee, Joe Lewis, Robert Trias and many others. His students traveled along and competed in big American tournaments. Together with Anderson they created the idea of importing American Sportkarate to Germany.

Father of Kickboxing and WAKO
Since that time Brueckner is known and respected as the father of European kickboxing. In 1974 and 1975 he promoted the first two big events in Europe. With a capacity of nearly 10,000 seats, West Berlin’s Deutschlandhalle hosted the first two European All-Style Karate Championships, the first professional Fullcontact Karate World title fight in Europe and the first two competitions between elite European and American fighters including Bill Wallace, Howard Jackson and Jeff Smith.
1977 was the year of WAKO – World All Style Karate Organization. It was founded by Anderson (USA), Brueckner (Germany), Stoker (Netherlands), Lemmens (Belgium), Schupp (Switzerland) and others being the first international non-profit organization for  Sport Karate. The sport was later renamed to kickboxing and WAKO changed it’s meaning to World Association of Kickboxing Organizations in 1987 during a reunification ceremony. It’s unique blue and white logo was developed, registered and copyrighted by Brueckner himself. This fact helped unify two split-up fractions of the organizations after a two year lasting breakup between 1985 to 1987.

Top Ten Equipment
His biggest achievement was creating an innovative brand of safety equipment. One that would last longer than competitors and protect athletes from inquiry. Top Ten safety equipment took years to develop and Brueckner devoted enormous resources into his project. He was named the ‘inventor of soft boxing gloves‘ by Berlin’s popular newspaper  Berliner Morgenpost and starting with the Olympic Games 1992 in Barcelona Top Ten gloves and headgear were supplied to Olympic Games for many years to come. It was official gear for WAKO for many years.
Top Ten gained it’s reputation from  being more shock absorbing and longer lasting due to it’s unique material and manufacturing process. It made the gear more expensive, but endured more stress. Many famous fighters helped to test and improve his products. Finally, it helped the sport of amateur boxing to remain inside Olympic competition.

Great Personality
Until today, George Brueckner’s achievements are visible and his efforts respected by martial artists around the world. Those who have been happy and fortunate to meet him as a friend will always remember him. He had a unique personality and people loved being around him.  Even people who were opposing his views many years back, miss his genuine kindness and generosity. George supported his friends with all resources he had available. He sponsored individual talents, organizations, events and innovative ideas.

George, we miss you and will always think of you in highest regards.