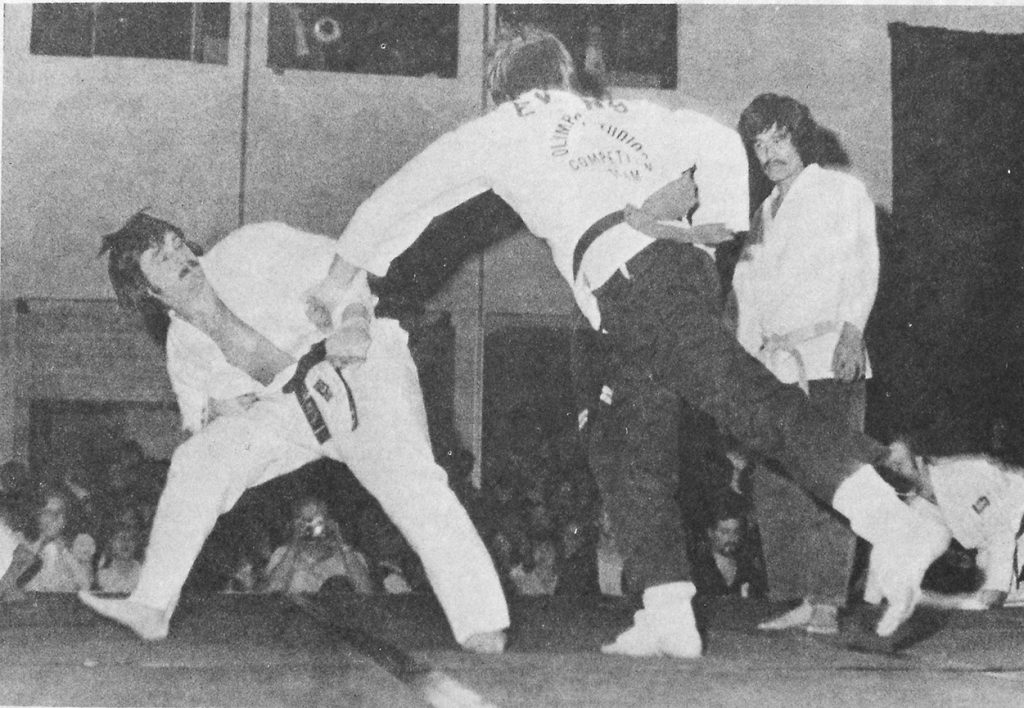 CHICAGO COMPETITOR AND PROMOTER Ken Knudson sponsored this years event. He seemed quite pleased at the turnout as there were so many competitors present that they packed the entire ballroom. Competition has really improved in the Chicago area as of late as well as the quality of tournament organization. Through the promotional efforts and high calibre instruction of Ken Knudson, Pat Wyatt, and Jimmy Jones, winning a Chicago tournament is no mean feat. Three hundred competitors at a Windy City tournament is considered a poor turnout.
In the Black Belt finals, Chicago’s Flem Evans won the Heavyweight division with teammate Ken Kolodziej winning Lightweight honors. Cleveland’s John Bell nabbed the Heavyweight runner-up position with Chicago’s George Brockman finishing third. In the Lightweight division, Chicago’s Preston Baker took the runner-up spot with Ohio’s Nate Cowger finishing third. There were several promising fighters that competed in the eliminations who deserve mentioning. Nate Cowger of Youngstown, Ohio and Bobby Tucker of Greenville, South Carolina are two new pros who are amongst the ten fastest kickers in the country. Ben Peacock, a student of Jimmy Jones, is a fast and flashy crowd pleaser who could make the regional standings if he competed more often. Mike Reed of Kankankee, Illinois is a big, powerful fighter who is coming up on the tournament scene and should be a real threat to regional fighters in the near future. In the match for the Grand Championship title the crowd was on its feet. Flem Evans began Round 1 by scoring two quick points with backfists to Ken Kolokziej’s head. Kolodziej scored next with a defensive reverse punch as. Evans was moving in. Evans then made it 3-1 scoring with a left handed lunge punch. Kolodziej, trying to catch up, attempted a jump side kick, but Evans hit him with a roundhouse as he hit the ground to make the score 4-1. In the closing seconds of Round 1, Kolodziej brought the score up to 4-2 by pointing Evans with a well-placed follow-up roundhouse to the chest. The crowd really became excited at the beginning of Round 2 as Kolodziej scored again with a roundhouse to make it 4-3. Kolodziej then tied the score with a well-executed drop kick as Evans was impaled while attempting a skip side kick. Both fighters were extremely aggressive through the entire match and showed good control and sportsmanship as well. In the closing seconds, Evans broke the tie with a reverse punch to the head and was declared the AKA National Grand Champion by a close score of 5-4.

There were several good demonstrations presented at half-time. A. E. Vea of Youngstown, Ohio gave an impressive selfdefense and weapons demonstration with students Nate Cowger, Judy Kolesar, and junior Bobby Hill. Judy Kolesar is one of the most prominent female Black Belt competitors in America today. Jim Ninios of South Bend, Indiana, who was partially incapacitated a few years ago due to a crippling disease, gave a self-defense demo from a sitting position that brought the capacity crowd to its feet. Ninios still teaches classes and is recognized as one of the most prominent instructors in the Midwest. New York’s Hidy Ochiai gave an impressive Kata demonstration followed by Chicago’s Ernie Williams who demonstrated weapons. The final demonstration was presented by AKA Chief Instructor Tadashi Yamashita. He gave his usual thrilling per-formance by demonstrating Kata, one step sparring, and his famous knock-the-apple-out-of-the-mouth stunt with Nunchaku. He then gave an extremely dangerous Kama demonstration. He swung the razor sharp Kamas (cycles) around his bare body on a string which left the spectators in awe. The feature event of the evening was a team match between Chicago and South Carolina. Chicago’s Steve Kijewski defeated South Carolina’s Jerry Jackson 3-1 in the opening match followed by another Chicago win as Ken Jakubzak defeated Sam Chapman 3-0. In the third team match, Carolina’s tough Darrell Morgan tied Bill Josaitis 2-2. In the final match, Grand Champion Flem Evans defeated fast Bobby Tucker 5-1 to give the powerful Chicago team a 14-13 victory and an exciting end to the 1973 AKA National Championships.